Today it was important I overcome the obstacles holding me prisoner in the woods of South County and make a break for it. Marie, my eighty-seven year old neighbor (and biggest cheerleader for A Berkshire Tale) had broken her hip and was in a nursing home in town. I was worried and had  to see for myself that she was OK. Jane, a fellow gardener, beta reader and BFF, was celebrating her eighty-first birthday and we had planned to celebrate by going out to lunch. Now, I mention their ages because they are both very strong, independent women and are always reminding me how lucky I am to be so young. (I’m sixty-six, so what’s not to love about that?) It’s all about perspective.

The annal-retentive road crew who, along with their five backhoes, trucks, assorted and asundry heavy equipment,  had become enamored  with our little, country lane during the past week. They apparently had decided to spend the rest of their summer encamped by the oak tree at the end of the driveway. I meant to warn them about the poison ivy growing up the tree, but a madly gesticulating worker in an orange fluorescent vest kept pointing me in the opposite direction of the main road. I didn’t stop to chat and began the interminable detour into town.

Marie was overjoyed and hugged me for a good, long time. I was relieved  to see how well she was doing. We talked and laughed for a while. The nursing home was a new adventure for her. (Again, it’s all about perspective.) Every time a nurse or aide came in, she proudly announced that I was her next door neighbor; the author she had been telling them about. I confided to her that as soon as she was back on her feet again, I was hiring her as my agent. She loved that idea. Eventually, she rested her head on the pillow as I read  her favorite part of the  book – the ghost monster in the sky. I left her sleeping peacefully and went on my way to Jane’s.

We spent a comfortable lunch hour chatting on the open deck of a restaurant  perched high over Main Street. She opened her present; a book about famous authors and the gardens that inspired them. She asked me to write a note on the title page with today’s date. “Something to etch the day into my memory,” she said.  “Happy days with friends must be cherished and never taken for granted as we age,” she reminded me. I gave her a kiss and wished her a wonderful Birthday Year.

On our way home, I spied a red chicken running across the road ahead. “What on earth is that thing doing?” Jane asked. I slowed down. Another driver was idling in the other lane watching the chicken wildly pacing  a few feet from her car. Then, it began to go in circles. I looked up. The sky was still in place. The chicken just 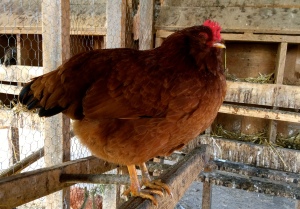 couldn’t seem to decide which way to go. I cautiously pulled over to the side of the road, parked the  car and took out my phone, switching it to camera. (I mean, a chicken crossing the road! I appreciated everything about the cliché.) But it wasn’t to be. The animal ran from me, seeking refuge under the woman’s car. She leaned on her horn. It stopped for only a moment but this gave me enough time to run interception. It bolted over to the sidewalk, then did an about-face as I blocked its path back to the road. The line of cars that had formed, crept by us, the drivers giving me a thankful wave. The chicken looked up at me and took off into the woods. I switched to phone mode as I walked back to the car where Jane was having a good chuckle. “Where did that chicken come from, I wonder?” she said as I fastened my seat belt. A more apt question would be, “Why was it crossing the road?” I observed. We both sat laughing, tears streaming down our cheeks. “Obviously, we’re easily amused,” I said once we had restrained ourselves.  “Obviously,” she agreed. (Days, hours, minutes with friends must be cherished and stored in our memories. I thought.) She invited me to stay for dinner, but I had to get back home. “Too bad,” she said. “I’m making one of your favorites.” She chuckled as she added, “Chicken pot pie.”

19 thoughts on “Why Is That Chicken Crossing the Road ?”