Meow! It’s Roxie here. Dad and Mom are out on another date night and I’m stuck here babysitting for ZuZu, aka “Mommy’s Widdle Snookums Puss”. No one ever seems to consider I might have plans of my own. Plans that don’t involve free kitty day care and playing endless hide and seek with a dumb ball of fur ! She hides and I take a nap! Clueless Snookums never figures out she’s the only one playing!! 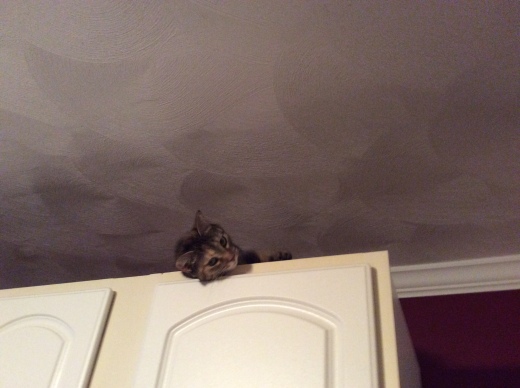 If you ask me (and no one ever does, I might add), I’m the one who could use a night out after the stressful day I had.

I spent a good part of the morning helping Mom and Dad paint the kitchen. For this I received not one bit of thanks.  At one point Mom even threatened me with a wet paint brush.  Now, there is a woman who needs to cultivate an attitude of gratitude!

The dining room table was a mess with stuff from the kitchen cupboards. I knocked off some of it to make room for us to have lunch. When Mom came in, she yelled so loud, she scared ZuZu. And then of course she had to pick up her “iddy, biddy, widdle pumpkin puss” to console her and to apologize  sincerely for frightening her “iddy, biddy, sweet widdle, pumpkin puss”. Seriously, those two need to get a life! They’re downright embarrassing. It makes me just want to hack up a fur ball.

After lunch Dad announced it was time to go  on an adventure and got the travel bags out. I have my own. (I refuse to share with ZuZu. I need my space.) When we arrived at our destination, I stepped out in happy anticipation and was hit with a nasty feeling of Deja Vu. Fate had played another cruel trick on me. I found myself standing on the same examining table as last year. We were at the Veterinary Clinic! The antiseptic smell, the white linoleum, the cold, hard scale, the frigid stethoscope, the sounds of other animals out there panting, waiting for their turn on the fluffy quilt. I hate the Vets! 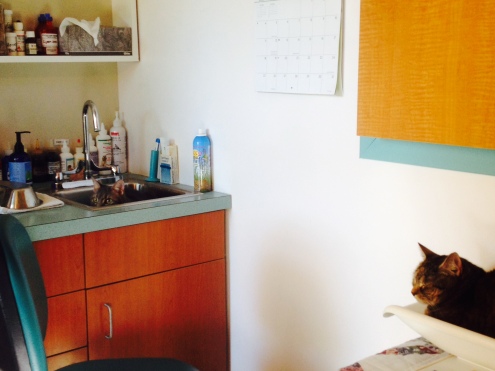 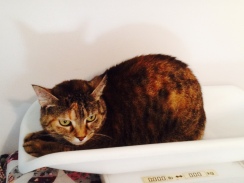 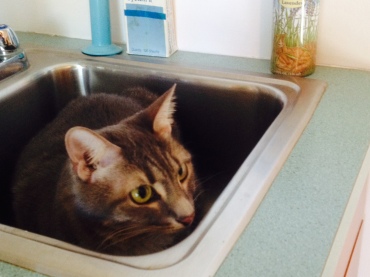 And so I promptly jumped from the examining table into the sink. While ZuZu  let them weigh and poke and probe and reward her with treats, I hid out. Let them come in and get me! I was not giving up without a fight. They tried to bribe me with a treat, but unlike some tabbies, I have my pride. If they wanted me, they’d have to come in and get me. I hissed and scratched and bit, but to no avail. Little Pumpkin Puss just kept on nibbling her treats, ignoring my plight. I put up a valiant effort but it was four against one and then they threw in the towel. A large pink one and I knew I had lost the battle along with my dignity! Mom kept commenting to Dad about how cute and precious I looked. Precious! Moi?!  I was mortified.

So here I am, home alone (except for Baby Snookums). Mom says I have to write an apology letter about the biting and the kicking and the scratching and the hissing to the Vet and her Lovely Assistant. I feel this request is totally unjustified. If anything, they owe me an apology. So, instead, I might watch some cat videos  and since we’re in a the middle of rousing game of hide and seek, I’m going to take a long nap.