This post is a bit late, but then, every day is Valentine’s Day around here. In the past, when Charley was the Director of Rhode Island Boys’ Indoor Track, mid-February was a busy time for him. We rarely went out on Valentine’s Day. He recently retired from his fifty years of track duties and so, this year we made actual plans to celebrate Lovey Day (that’s what Charley calls it). Much to Roxie’s dismay, we decided not to have a cozy meal at home. Charley felt a getaway was in order and made reservations at the Weekapaug Inn. (He wanted me to get away from the mystery book I was writing. This involved my putting the computer to sleep, taking a shower, brushing my hair and donning clean clothes. Deodorant and toothpaste also came into play.) We packed an overnight bag  and took the short drive to Westerly. 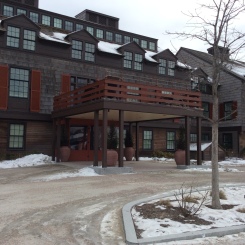 The Weekapaug Inn dates back to 1899.  www.weekapauginn.com  Situated directly on the Atlantic Ocean, it was damaged by the Great Hurricane of 1938. (Hurricanes wreak havoc with ocean-side real estate around here.) The owners, Frederick and Phebe Buffum,  rebuilt farther back in a more sheltered  area behind the dunes. Four generations of the Buffum Family cared for the Inn until 2007  when it was closed.  In 2010 it was restored and opened once again as a four-season resort.

Now, the weather here in New England has been very fickle this year. We’ve endured a record-breaking hot summer and a record-breaking cold winter. The weekend we were there was well below freezing and the coldest it’s been in thirty-two years. Needless to say, we did not venture out on the beach in search of sea glass nor did we choose to go bird-watching. Instead, we had a lovely dinner in the dining room and sat for a while in one of the spacious sitting rooms. We could have spent time with a jigsaw puzzle or played chess or checkers or perused the many nature books displayed all around. There was no organized stargazing session that evening, but the telescope was available and pointed out to the skies over the pond for guests to use. We chose just to sit and cuddle in front of the fireplace. 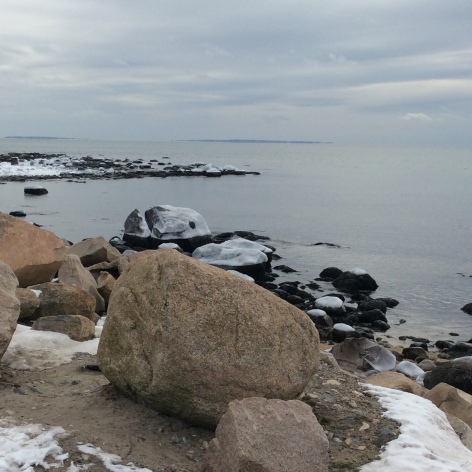 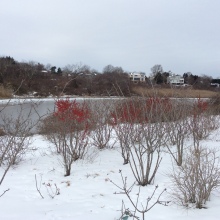 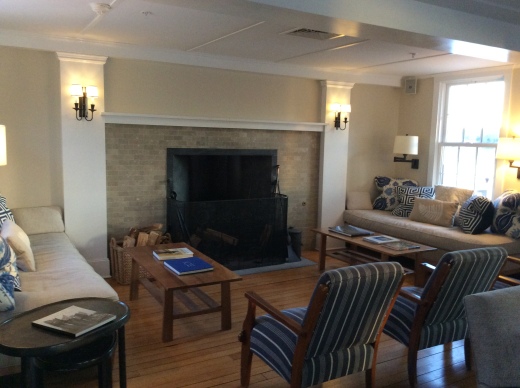 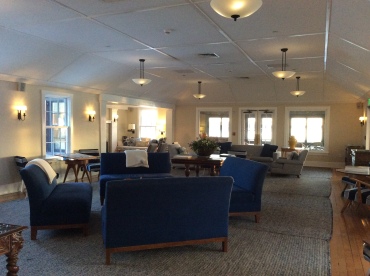 In the early morning hours, I awoke, dressed and wandered around while everyone was still sleeping. I do this a lot. I’m very curious.

Once on our kind-of-pre-honeymoon at La Fonda in Sante Fe, New Mexico, I was wandering around the hotel roof waiting to take pictures of the sunrise over the town. I had thrown on a very short, terry cloth robe over my birthday suit and  hadn’t thought to take keys. All of the doors automatically locked behind me as I made my way up to the rooftop. I blissfully took photos and then, attempted to return to our room. Not happening! I climbed over the fence around the pool and then jumped from balcony to balcony until I arrived at what I assumed was ours. (They all looked alike from outside.) I quietly banged on the glass doors. A sleepy Charley opened the curtains to find me happily waving at him in my very short, terry robe (with my naked butt hanging out – I’ll spare you the selfie!). “What are you doing out there?” he asked somewhat bewildered. (We weren’t married yet and so this was a bit of an initiation into what his life was to become.) All I could think of was Emerson asking a similar question, “What are you doing in there?” looking into the jail cell of his friend Thoreau  who answered “What are you doing out there?”

And so I found myself out on the back deck of The Weekapaug Inn overlooking Quonokataug Pond as the sun was rising.  It being quite frosty and me not wearing a coat or boots, (my butt, however, was properly covered) I wisely chose not to mosey on down to the lawn chairs frozen solid  into the snow below. I chatted with some of the staff setting up for the day and returned to our room (I had a key this time.) to wake Charley with tales of my adventures. I shared the photos and we went to the dining room to have a lovely breakfast. 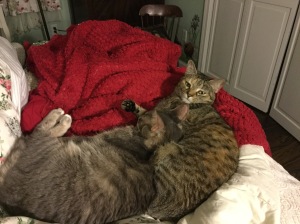 On arriving home, Roxie met us at the door, irate that we had once again gone off leaving her alone to babysit ZuZu. I’m sure you’ll hear about this from her at a later

time. But for now the computer is once again turned on and I’m back to  writing in our own cozy home here in the woods of South County.

Here with a Loaf of Bread beneath the bough

A Flask of Wine, A Book of Verse—and Thou

Beside me singing in the Wilderness—

And Wilderness is Paradise enow

from The Rubaiyat of Omar Khayyam  Edward FitzGerald’s translations of the Persian poet, Omar Khayyam

97 thoughts on “Wilderness is Paradise Enough”