I have a favorite joke. Actually, it’s the only joke I can ever remember. Good I’m not a stand-up comedian because that would make for a very short set. Here it is:

Descartes, the French philosopher supposedly famous for saying, “Je pense donc je suis.”  (“I think, therefore, I am.”),  walks into a bar. He orders a Smiddicks. (It’s a British pub – Ye Olde Hooters. There’s a wise-looking owl sitting atop the pub sign. This  obviously serves to attract great thinkers from all over the world.) He drinks his mug of warm beer and then the bartender asks if he’d like another. Descartes replies, “I think not” and then he  promptly disappears into thin air.

Ba doomp boomp  (That’s the drum thing that comes after a punch line.)

My husband, Charley and I were shopping and I came upon this package of paper napkins.  I chuckled and returned it to the bin but then Charley picked it up and put it in our basket. He  advised me to buy the other packages. He knows me well and realized I’d have reverse buyer’s remorse if I didn’t bring them home with me. “Are you sure you don’t want the others? Are you positive? Give thinks.” I didn’t listen to him and bought just the one. It’s out on the kitchen counter right where I can see it. After a week, in an odd, convoluted sort of way, Give Thinks  had me thinking.

I sat in the kitchen, much like Rodin’s The Thinker,  except I was wearing clothes. (It’s still a bit chilly here in Rhode Island.) And, having been an English teacher in a previous life,  I pondered the usage of the word: noun and verb forms; present and past tenses. Think, thinks, thinking, thinker, thought. Why couldn’t thinks be 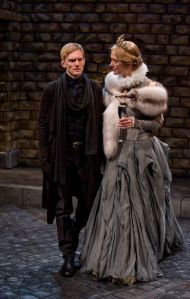 used as a noun? It didn’t seem to be a far-fetched idea Two great thinkers  who have tinkered with the word came immediately to mind.

In Shakespeare’s Hamlet, while watching a character meant to represent her in a play, Queen Gertrude comments to her son:”The lady doth protest too much, methinks.”

And, of course, those famous words of Tweedy Bird.

I’ve often been told: “Give it some thought.” “Think about that.” “Are you sure?” “Is that what you really want to do?” “Maybe you should sleep on it?”

Very good cautionary advice in many circumstances. But in my experience, words too often easily ignored, which inevitably leads to  problems

And then I gave it more thinks. Things that have been bothering me lately flashed through my head.

What are people thinking when a bigot, egotist and buffoon has support to become a national leader? Does no one remember the last time that happened and the consequences to millions of people?

Why are we not more empathetic to people who are lost and in pain? Haven’t we all been bereft at some time in our lives?

When did  refusing sanctuary to those in need become a potential national policy?

How many mistakes do we need to repeat before we learn that killing each other is not an option for maintaining world peace?

Why do some people feel they’re more equal than others?

And why is acquiring money and material possessions the ultimate goal for so many?

I’m pretty sure all of you can add to my list and I’ll leave that to you because I like to keep my posts under 500,000 words. Undoubtably with less thoughtlessness, the world would be a better place.

This has led me to thinking that what we really need is an original ad campaign with a truly memorable catch phrase. Flyers, posters, bill boards which will force us  to stop in our tracks when we see them and say out loud, “Wait a minute – ‘Give Thinks’ –  shouldn’t that be an A? What idiot wrote that? Do they not know how to use Spell-Check? Where was their  Quality Control Supervisor?”

And I came up with this:

Enough musing for today. I think I’ll go back to the store and get the rest of those napkins. Charley was right. Who’d a thunk it?