Roxie, here. Hope all is going well with my good friends out there in the blogosphere.

The folks were watching a movie last night. In it, a girl named Alice falls down a rabbit hole and ends up in Wonderland! She meets a Cheshire Cat who can disappear into thin air. I would love  to find out how he does that. It would really come in handy sometimes, so  I decided there and then I’d go in search  of my own rabbit hole.

The next day, when Mom opened the back door to bring out the hummingbird feeders, I made my escape. (Will she never learn?)

I’ve been watching the chipmunks  running in and out of the woods digging in the gardens since the beginning of March. Our yard’s full of chipmunk holes, especially under the May Apples which are in bud right now. There were lots of holes to choose from and I tried to stuff myself into a few but they were all too small for my head. (Mom’s always saying I have a big head.) 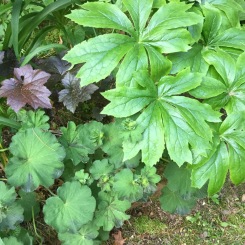 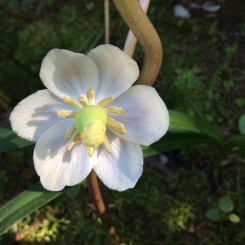 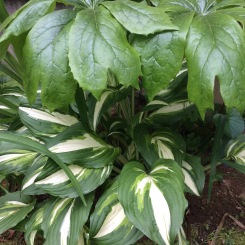 Now, it was a long winter. I hadn’t been outside in eons and the first thing I noticed was the smell of the French Lilacs around the patio.  Totally intoxicating!  I ducked under a bush next to the Forget Me Nots and almost fell asleep. Just like Dorothy in that poppy field.

While I was nodding off, it occurred to me that, like Alice, Dorothy had ended up in a place far away from home. A place called Oz. But, tornadoes not being an option at the moment in Rhode Island, I set off looking for a larger hole. I scurried across the grass and stopped dead in my tracks when  I realized how soft it was. I took a deep sniff and licked my paws, then rolled over on my back. Puffy white clouds above and a fresh, green carpet underneath me. Absolute Heaven!

I looked up to see Mom coming toward me, so I zoomed into Billy’s Garden. He’s a cat who once lived in our house. Supposedly, he’s hiding out here somewhere “pushing up daisies”. I looked around. No daisies. No Billy. But there were the most beautiful, fragrant peonies flowering near the clematis vine. I’ll say this for her, Mom really does plant some gorgeous flowers.

Then, I saw those big, stinky feet coming toward me. Dad keeps telling her to wear her shoes outside. I don’t know why he bothers. She never listens to anyone. In the summer, she tracks stuff all over the house – footprints the size of a Yeti’s leading from one room to the next. It’s early June and the dirt already is permanently caked on and incrusted between her toes and I’ve yet to ever see her lift a leg to even try to lick them clean. She’d probably tip over if she tried. The woman’s always been a bit unbalanced in my estimation. 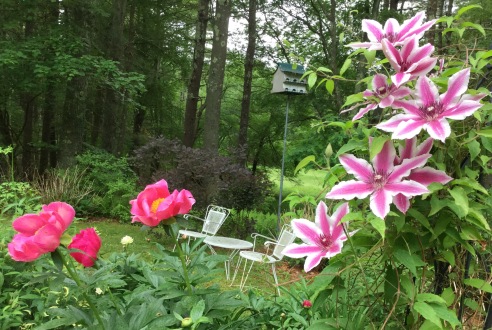 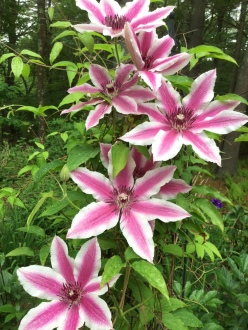 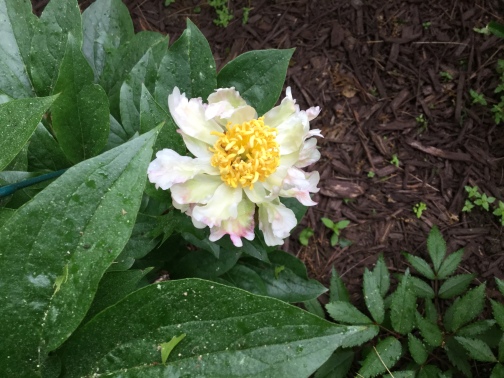 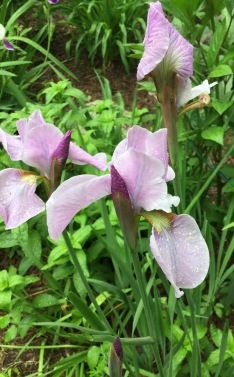 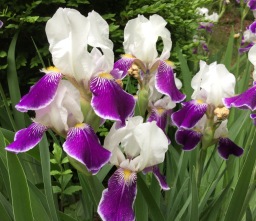 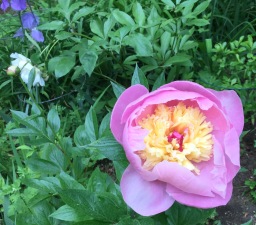 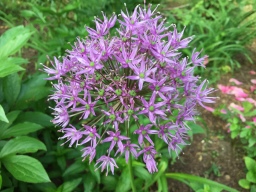 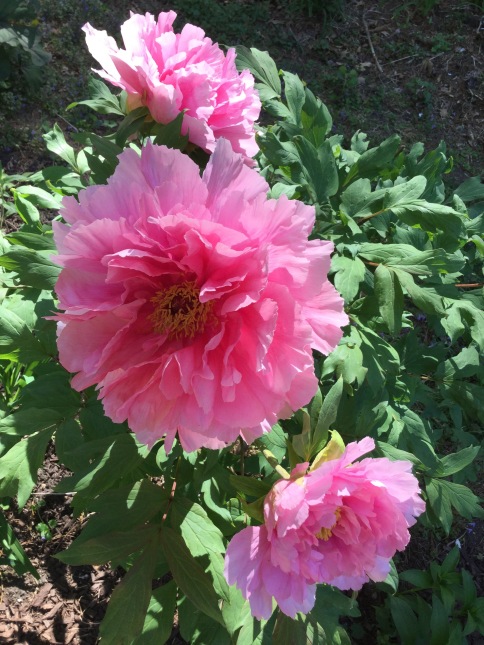 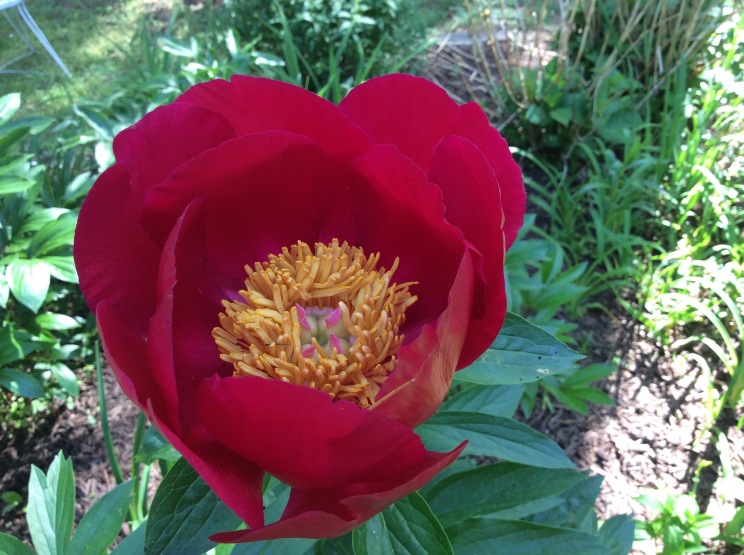 She almost caught up with me under the hydrangea. Not much cover there yet. Just sticks coming out of the ground with a few buds and some leaves around the base. I was going to yell at her, “You’ll poke your eye out!” but I waited to see if she did. Instead she ran to the screen door and began yelling into the house for Dad. “Charley, Roxie’s escaped again. Help! The red-tailed hawks are going to get her!” I took off and bolted toward the front garden to hide behind the Irises. They’re in pretty thick clumps since Mom didn’t bother to divide them last fall.

For weeks, I’ve sat in the window gazing down on the buds, waiting for them to open and it seemed like this morning’s sun had baked them until they finally popped like golden biscuits.  Some of the purple ones actually smelled like the grape jelly Dad puts on his toast. That made me hungry, but I couldn’t stop now. I crawled behind the Columbine and the yellow Irises and made a bee-line for the Gazebo. Ah, “Gazebo”! The most beautiful word in the entire English language. I’d seen a woodchuck burrowing around and, sure enough, there was a hole  underneath big enough for the likes of my svelte form. 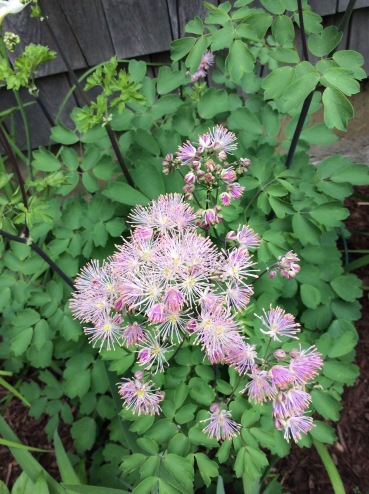 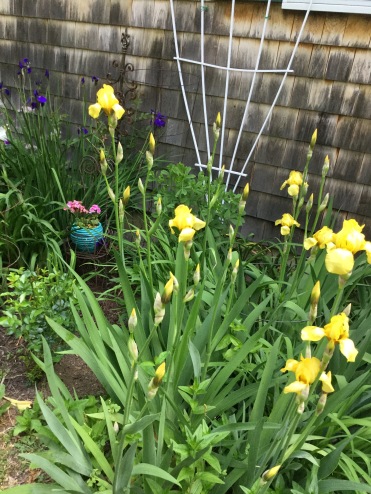 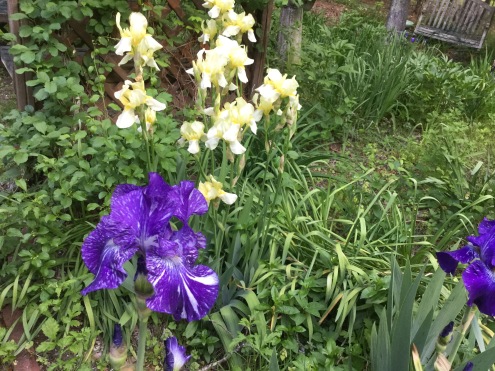 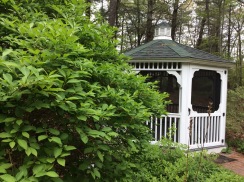 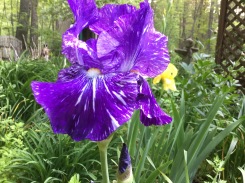 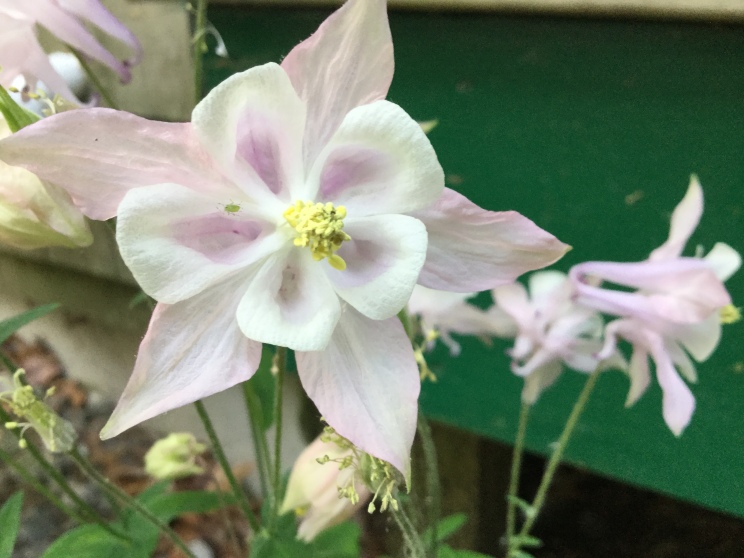 Crazy Lady was still standing on the front steps screaming, “Charley! Charley! Roxie’s escaped again!”  Dad came bounding out of the house and into the woods. He gave me a treat, picked me up and rubbed behind my ears. “I have a surprise for you,”  he whispered as he opened the door of the Gazebo. Inside was the furniture he’d stored in the cellar for the winter and there was my favorite chair and my blanket and my tables all in place once again. 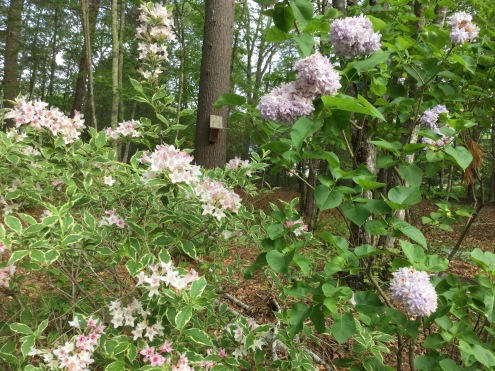 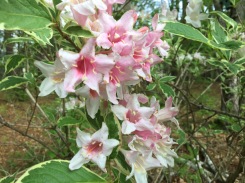 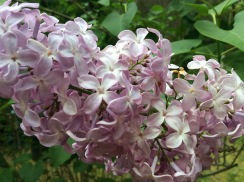 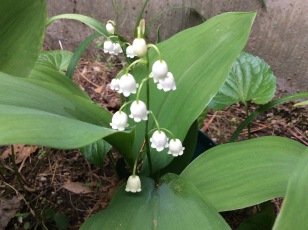 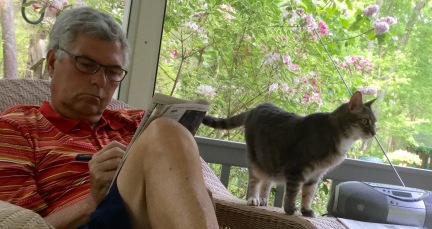 We sat together, looking out at the Weigela bush in bloom and the Lilac and the sweet Lilies-of-the-Valley. He tuned in the radio to the Yankee’s game and began reading his book. Deja Vu! Just like last summer and all the summers I can ever remember. Sitting next to him I realized I didn’t need to fall down a rabbit hole or follow a yellow brick road.  We had our own little Wonderland, our own Emerald City right here in the woods.

Oh Frabjous Day!” I called to the cardinals hiding deep inside the Forsythia’s branches and to the squirrels chasing each other up and down the white pines.  “Callooh, Callay” I shouted out to the hummingbird at the feeder. I spied a rabbit sitting in the woods near the Foxgloves. “Aren’t you late? Aren’t you late? For a very important date?” I meowed. It hopped off toward the gargoyle bench. Maybe that’s where its hole was. The frogs were out playing checkers with the ladybugs and suddenly I felt that all was right with the world. And then the Yankees got a home run. Dad tickled under my chin and I gave him one of my adorable looks. 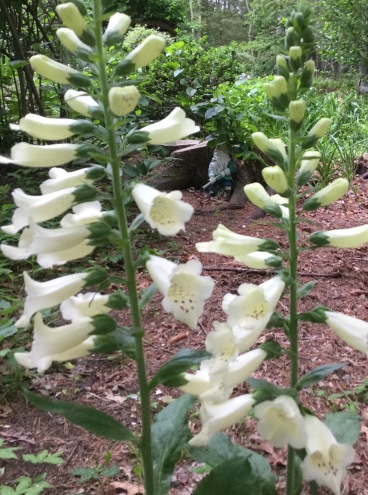 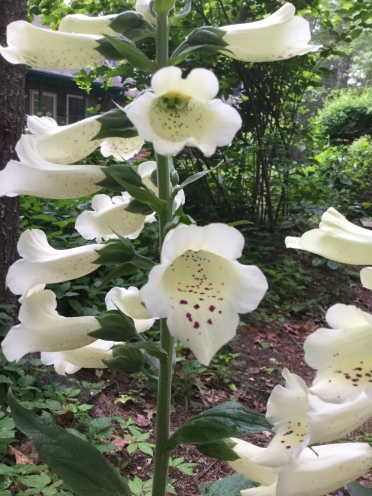 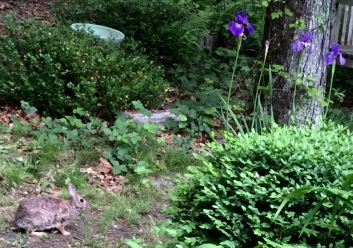 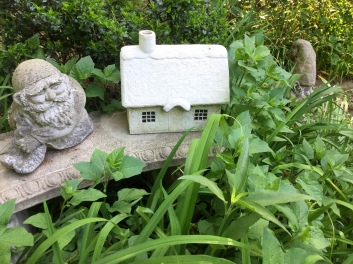 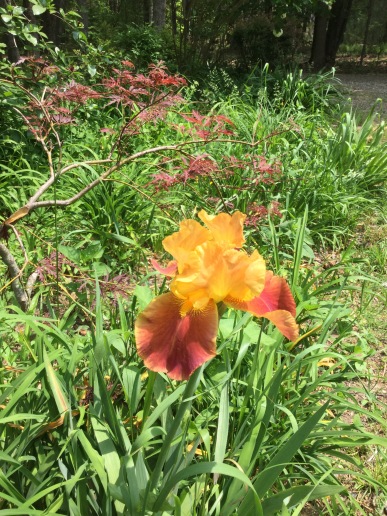 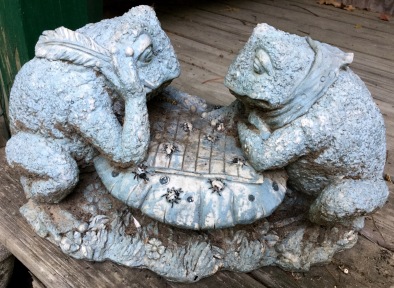 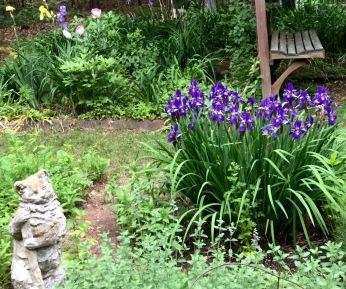 At that very moment, Mom came prancing out of the house with Baby Snookums in her arms. Where are those flying monkeys when you needed them?  Dad greeted them with a , “”Well, look who’s here!” I mumbled,  “Off with their heads!” The little darling was carried in and carefully set down upon her throne. She sat there looking around like she owned the place; checking the floor for bugs to eat. Disgusting habit!

I jumped to the back of the settee and shut my eyes as tight as I could.

Eventually she climbed up next to me, hogging  most of my blanket. “Will no one rid me of this troublesome cat?” I howled. I waited patiently for an answer. This was not a rhetorical question!  The minutes ticked by. No Jabberwocky emerged from the vernal pool; Dad continued reading; Mom was busy working on a crossword puzzle; birds were chirping; the Yankees got another home run.  And then, Dad looked up contentedly, smiled at all of us and said, “We are so lucky.” In my heart, I  knew he was right – as usual! And I felt happy, too, even though ZuZu’s butt was touching me. So, I swatted her with my tail and decided I’d stick around here for a while longer. It’s really not so bad and “giving thinks”  I purred out loud with a catitude of gratitude: “There’s no place like home!”

Have a Frabjous Week!  Your friend, Roxie D. (aka The Other Cat)