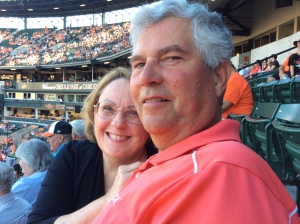 This post is going to be about a few different topics – Charley and Me, Baltimore, Baseball, Brawls, Politics, Civility, the Media, National Values, Umbrellas and Flags because today is Flag Day here in the US of A.          I promise I’ll tie them all neatly together in the end and hopefully, you’ll still be with me when I do.

Last week Charley and I travelled to Baltimore, Maryland. We go there on a regular basis because Charley is involved in clinical studies to find a cure for cancer. He’s been in some amazing studies and although he has an aggressive form of prostate cancer, after nine long years, he’s now in remission. 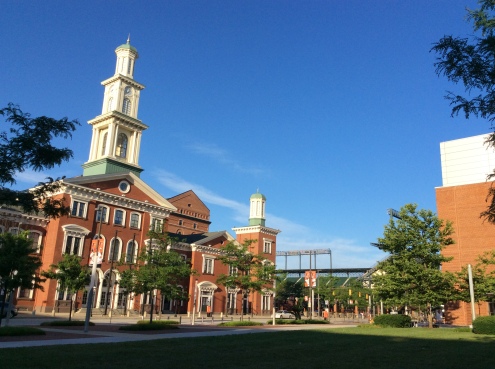 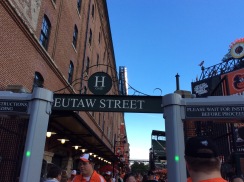 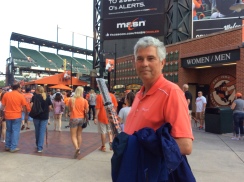 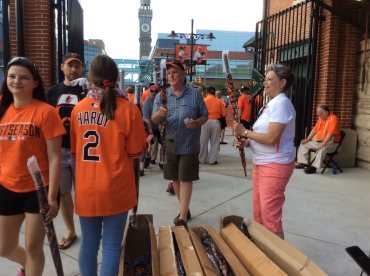 Well, as some of you know, we try to make these trips more than just a hospital visit for tests and scans.  We love baseball. If the Baltimore Orioles are playing at home, we get tickets and spend a great evening eating hot dogs and drinking beer and cheering the players on. So, last Tuesday night we found ourselves at Camden Yards, the home of the Orioles. At the gates, they were giving away free orange and black (Oriole’s colors) golf umbrellas. The weather was beautiful and fans were milling around buying souvenirs and getting dinner  and snacks from the vendors before heading to their seats.  In the stands, a cool breeze blew in from the Inner Harbor. The game started off with The Star Spangled Banner. The tradition of  performing this National Anthem before every ball game began in World War II.

Warning: at Camden Yards, when you get to the line in the song, “O say does that Star Spangled Banner yet wave”,  everybody hollers out the “O” as loudly as they can. (Because of the O in Orioles). It scared the crap out of me the first time this happened. I was not prepared. I now yell “O” right along with everyone else. I just make sure I’m in the Oriole’s Ball Park, as this would not go over very well at Yankee Stadium or Boston’s Fenway Park.

Now a very short American History Lesson for those of you still with me. 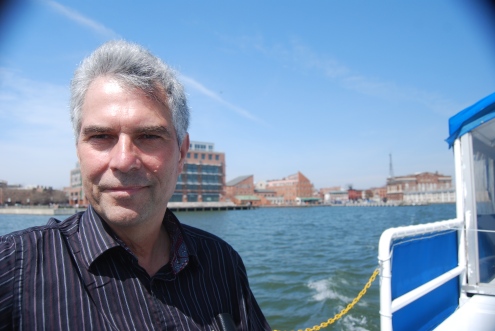 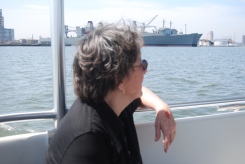 Clare on most going to Fort McHenry 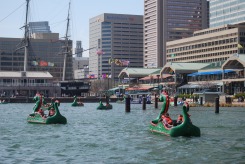 Dragon boats in the Baltimore Harbor 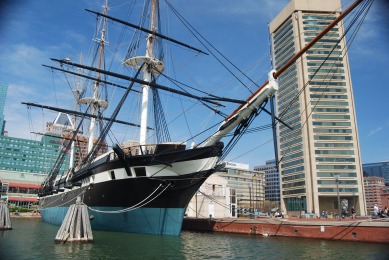 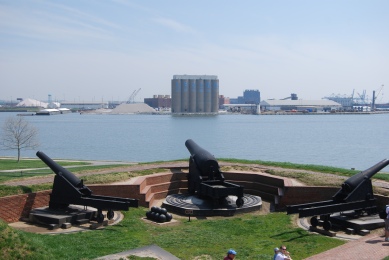 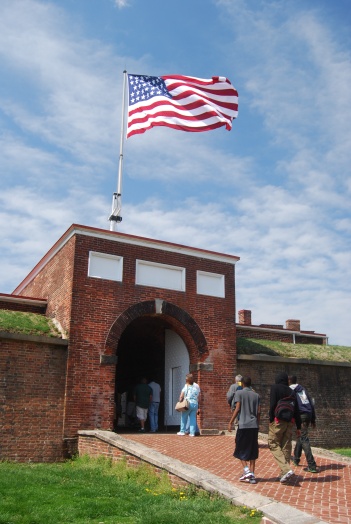 US Flag Flying over Fort McHenry 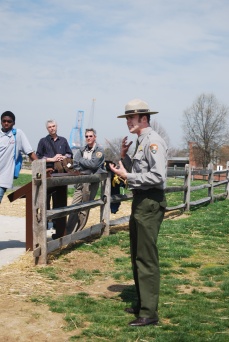 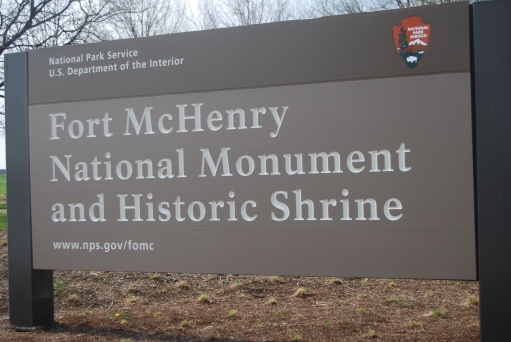 Five years ago, when Charley and I were staying in Baltimore for a few weeks, we took a boat ride through the Harbor to Fort McHenry. It was a beautiful April day and we took advantage of the unseasonably warm weather  to wander around the Fort and speak with the docents. Inside the building we viewed  a documentary of the famous battle waged there on September 13, 1814. The film  ended with the movie screen lifting slowly, revealing a window to the outside and a view of  the flag that now flies over  Fort McHenry.

During the War of 1812,  Fort McHenry was bombarded by British Ships. The Citizens of Baltimore and the US Army stationed there held off the attack and the next morning the American Flag was still flying over the Fort. A poet, Francis Scott Key had watched the battle from the vantage point of a British Ship where he was being detained. Upon seeing the US Flag flying  triumphantly over the Fort the next morning,  he was inspired to write a poem called “Defense of Fort McHenry”  which later became the lyrics to The Star Spangled Banner which was set to the music of a song by composer John Stafford Smith.

The original flag, known as the Star-Spangled Banner which was flying over the Fort that morning had been made by Mary Young Pickersgill and other seamstresses from Baltimore. It now is displayed in the National Museum of American History in the Smithsonian Institution.

Lesson done. Save your questions for later. I still have a blog post to finish before Flag Day, 2016 is over.

Here’s a riddle for you: When does a baseball game become a wrestling match?

The game started as Charley and I chowed down on our beers and hot dogs.The people sitting next to us were avid fans, interesting and fun. In the first four and a half innings, we saw some great defensive plays. Lorenzo Cain, center fielder for Kansas City, caught a ball headed out of the park by jumping like Superman taking flight; throwing himself  against the top of the back wall and catching it at the last second in his outstretched glove. It’s a wonder he didn’t break his ribs!  Fans from both sides whole-heartedly applauded the play. 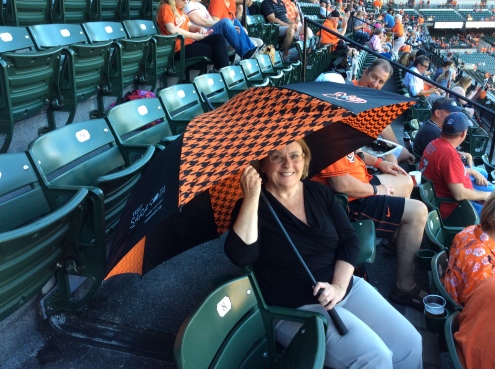 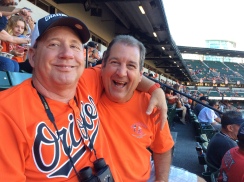 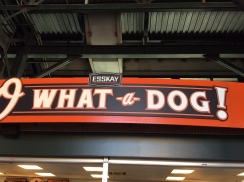 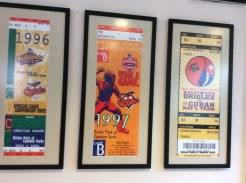 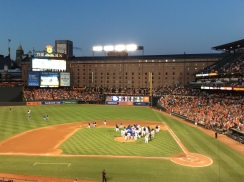 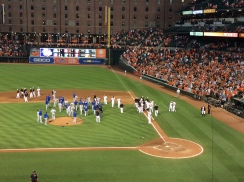 In the bottom of the fifth inning,  the  game suddenly turned into a melee. The Kansas Royals’  pitcher, Yordano Ventura, purposely threw a 90 mile an hour pitch right at the Baltimore batter, Manny Machado.  Machado reacted by turning quickly, causing the ball to strike him in the back. Ouch! He threw his batting helmet down and stormed the pitcher’s mound, getting in a few good shots before Ventura tackled him to the ground. The benches emptied. The area between the mound and first base became a pile of bodies on top of the two combatants, all this while the fans were in a frenzy standing and chanting,  “Manneee! Mannnee!” It took some time for the players to get disentangled. Manny was pulled off the field still yelling at Yordano  who was now surrounded by officials and players. Both were ejected from the game and replaced with subs.

They were later to receive suspensions for their actions. Machado must sit out four games (which he’s appealing) while Yordano will be benched for nine.

After the incident  Baltimore  scored four more times and the Orioles ended up winning 9-1.  It’s never a good  strategy to get the other side riled up. It almost always backfires. It’s a male macho thing having to do with pumped-up adrenalin that I don’t care to psychoanalyze at this time. (Or any other time for that matter.)  And even though Manny had played only 5 of the 9 innings, he was selected as Player of the Game.

The next morning we were walking through the airport with our new golf umbrellas and people were asking us to tell them about the “Brawl Game”.  Having some extra time before we had to board, we went to the Silver Diner for breakfast and sat at the bar looking up at a television monitor replaying the brawl.  On another monitor, Hillary Clinton was giving a victory speech to her followers after winning most of that Tuesday’s State Primaries.

Trump was on another screen whining about his racial slurs being misconstrued and how he expects the Republican Party to unite behind him and “Get over it”.  “It” being every stupid thing that has regurgitated from his “pie hole” since the beginning of this political farce. And then commentators turned to the topic of “Civility in politics”.  I turned and looked at Charley in utter disbelief.

Seriously folks! Civility in Politics?!!!! That pig’s been out of the barn for years! Doesn’t anybody remember Sarah Palin?

Just as “there’s no crying in baseball”,  “there’s no civility in politics. It’s just another Brawl Game. It’s the fodder which makes up our daily breaking news here in the states.

And elsewhere there are people trying to escape wars and disasters; parents trying to gain a better life for their children; women and men, like Charley, volunteering for clinical studies to find a cure for some of the horrible diseases that deprive us of our loved ones. Yet, these news items were what we were greeted with by the media on a Wednesday morning after the Tuesday night “wrestling matches”.

Please know that we have good, compassionate leaders in this country, just as there are in other countries around the world. People who have become our Statesmen and Stateswomen. People we are proud of who represent us with grace and good will in the best and worst of times. They’ve done this through acting civilly and truly caring about the needs of  the people. All people.

So, when does a baseball game become a wrestling match?

I would guess, the same time a political campaign becomes an ugly brawl. The consequences will be lasting for everyone. Just ask Ventura’s team mates, especially the ones who’ll be hit by  fast balls in retaliation for all of the players on all of the opposing teams he repeatedly has beaned now and in the past.

And so I ask myself: “Who will be the least civil, the most self-absorbed, obnoxious person to make tomorrow morning’s news and talk shows?”

When I was a child, I remember vividly that  the first thing on television in the morning was a test pattern and then the American Flag with the Star Spangled Banner playing in the background.

We used to be a country worthy of the words in that Anthem. Many of us still take these words very seriously. We want other countries to see we have leaders who are intelligent, trustworthy and compassionate.  Americans truly want these qualities in our leaders, believe me.

I am not looking forward to the months ahead. Just think of what we’ll be subjected to on the news when the National Presidential Conventions begin at the end of July – and then on into the November election? There will be no civility in politics, just a never-ending Brawl Game of epic proportions, providing the media with much in “entertainment value” to boost their ratings.

And blood will be spilled and there will be both whining and crying and gnashing of false teeth. And the consequences of it all will reign down upon the multitudes and no over-sized golf umbrellas will protect us from that downpour. The candidates will never be given the suspensions they well-deserve, but we will all be held in a state of suspension until we can find a path to disentangle ourselves out from under what this ugly brand of politics has piled upon us.

A Peaceful Flag Day to everyone.