I celebrated twenty-seven Fathers’ Days with my Dad. He died in June when the roses along our fence were in bloom. I still have the card I bought  him for that twenty-eighth Fathers’ Day he never lived to see. It’s tucked away with a photo of me and him when I was about two years old. He’s proudly holding my hand and we’re all dressed up in our Sunday best.

Twenty seven years was not enough, but he left me with so much to remember him by including a deep love of music and an insatiable curiosity about all things. Most of all, he gave me the confidence that has made all of the difference in my life. My dad let it be known that I could do anything. Twenty-seven years was just not enough time to share everything life has to offer.

Yesterday morning, I was Skyping with my friend, Shengdong and his daughter Milanda. I’d met them a few years ago when Shengdong was  doing research at the University of Rhode Island.  We spent many happy hours learning about each other’s cultures.

Since they returned to Xiamen, we’ve kept in touch every week over the past  few years – in spite of the technical video and audio difficulties that regularly occur.

It struck me, as I watched both of them, that Shengdong reminded me of my father. He is one of the best dads I’ve ever known. Like many fathers, he is loving, patient, caring, protective and very proud of his daughter’s accomplishments; but, I’ve observed more than that over the last few years. With his whole heart and soul, he devotes his life to making sure Milanda has every possible opportunity he and his wife Mary can offer her. They are committed to this and have made very difficult choices in order to insure she will be afforded these opportunities. 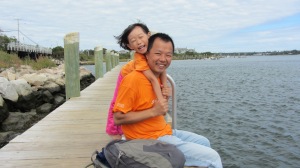 I met them at our Church when he was studying as a Fulbright Scholar at the University of Rhode Island. Back home in China, he’s a department head at The University of Xiamen. His wife, Mary, is a librarian. Milanda was five years old at the time he was awarded the grant. They chose to let their daughter stay here with Shengdong when Mary had to return to her job.

Milanda was enrolled in West Kingston Elementary School and her Dad took over complete responsibility for her that year. And he was amazing! She learned English; swimming; ice skating; how to ride her first bicycle; how fish and how to make her first snow people and snow angels. She made friends, celebrated American holidays, tried different foods, traveled to as many places in the US as he could take her in that short time. They visited major cities; had fun in the White Mountains, at Disney World and  Sea World. They went to the beach, to colleges, museums, National Parks and even took an Alaskan Cruise. And I have the photos to prove it –  hundreds of them with Milanda front and center.

And now he and Milanda are there on my computer screen every Saturday morning (Saturday night in China). The two of them so far away and yet, for an hour every weekend, so close. We use the time to keep connected,  bringing each other up-to-date on our lives and they practice using their English. In spite of many efforts on Milanda’s part (She uses flash cards with English, Chinese letters and pictures.), my Chinese is still abysmal and I have yet to master the fine art of origami (although I do have a growing collection of sail boat hats in various sizes stored away in my desk.) We read and lately she has found a riddle book with which she tries to stump me every Saturday. But I happen to be quite good with riddles. Who knew?

Last week they celebrated the Dragon Boat Festival and Milanda carefully explained about the origins of the holiday. Qu Yuan was a poet and minister who lived during the Warring State Period of Ancient China. He tried to advise the Emperor they needed to become united to protect themselves. But no one listened to him and he was banished. Eventually, what he had predicted came to pass and his province was invaded and conquered. In sadness, he threw himself into a river and died. His poetry and wisdom is part of the Chinese curriculum.

Now, there could be an underlying modern social studies lesson in this for all of us. Maybe that’s why she took notes to share the story with me. And I found this YouTube Video for any bloggers interested in further information on the poet and the origins of the Dragon Boat Festival:

On Saturday morning we had a good connection. Shengdong and I were able to discuss what was happening in our two countries. There was a bombing in Shanghai that is under investigation. Not much has been released to the public. We spoke of the Orlando killings which is front-page news all over China.

Milanda shared her latest book with me. It’s about a Rabbit King and she likes it because it’s set in a series of stories just like A Berkshire Tale. Then there were the requisite riddles. I was a bit slow and needed some clues, but did manage to work them out. For this I was applauded heartily. Milanda believes in immediate, positive reinforcement.

Next week she has exams (Yes, in China second graders have exams and she is very serious about studying for them.) and then she will be on vacation for a few weeks. She’s decided to take swimming, piano and art lessons this summer. Shengdong feels strongly that her school work should be supplemented with non-academic pursuits she enjoys.

And she’s very exited. They’re going to go to Tibet in August. Shengdong worries about the thin air, but Milanda assures me she’s in much better condition than her mom and dad.

I’m looking forward to the photos.

And lastly, from me and the children who dearly love you,  A Happy Fathers Day to all of the men out there who’ve made a positive difference in our lives. Thank you from the bottom of our hearts. 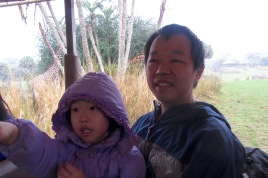 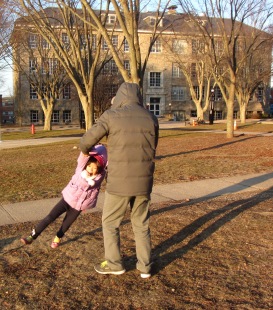 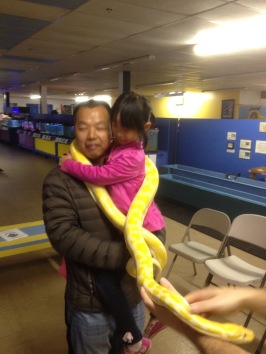 81 thoughts on “On Fathers and Their Daughters”