Well, Talk Like a Pirate Day 2016 is over and we are getting back to some semblance of normalcy,  i.e. using a commonly understood  dialect and not AAARRRRRGGGGHHHHHTICULATING in the little-used (no mystery why), limited pirate vocabulary  that comes out every September 19th around this house.

I tried to give myself a  break and recycle the original 2015 post. (How much more can one add to the “imaginative” facets that make up this “beloved” holiday? And, as those of you who received 3 emails from me found out, I don’t know how to repost.)

I kept at it and did manage to get something published after over 2 frustrating hours and numerous attempts. So much for giving myself a break!

During the fiasco I received advice from some of you and instructions and encouragement on trying this  reposting routine again.  I blame you (Melinda and Clive are you reading this?) if I lose half my followers. I can expect just so much tolerance and patience from them. So, here goes… (I know, Hariod – you hate ellipses, but surely you can see how well it fits in this situation?)

Last September, I wrote about National Farm Alpaca Day. I really love alpacas and my latest book, The Pacas Are Coming! ZuZu and the Crias   is all about them with lots of photos (much to Roxie’s chagrin).  I’m going to try to repost this again with this new intro and another featured image. Don’t hate me!

In the January chapter of A Berkshire Tale, the little tabby overhears the farmer and his son talking about bringing new animals to the farm. “They eat grass and hay and some grain, so it won’t be much of a bother…They’re  gentle creatures. I think they’ll do well with the other animals…People love alpacas with their humming and their beautiful fleece.”

“Packas, ZuZu? And what are packas, little one?” her mother asked.

“I’m not sure, Mama. But people love them and they’re gentle creatures, and they hum and have fleas…”

“They have fleas? I don’t think the farmer would bring animals with fleas into the barn, ZuZu.”

“But Mama, they’re beautiful fleas. The farmer said so,” explained the kitten. “I can’t wait to see them. This is the best day of my whole life! Uh, Mama?”

“How long is it ’til Saturday?”

“For you, little one, I’m afraid it will be an eternity,” her mother sighed.

This weekend, I’ll be heading to Shadow Pines Alpaca Farm in Exeter, Rhode Island, about ten minutes from our home in  South Kingstown. Bob and Vivian Ball are having an Open House September 24-25 from 11AM-3PM to celebrate National Alpaca Farm Days.

The last time I was at Shadow Pines  was in late May on shearing day.

Alpacas, along with vicunas, guanacos and llamas, are part of the camelid family found in South America. There are two breed-types of alpacas: huacaya and suri. The suri alpacas have long, silky, lustrous  fleece. The  photo above is of Charlie and Buzz. They are huacaya and their fleece is fluffy and crimpy. Charlie and Buzz are the alpacas from A Berkshire Tale. In the book their names are Ginger and Twyla and their mother is Dora. The mothers are called dams, the babies are called crias. Alpaca fleece is highly valued and the process used to shear these animals is quite interesting to see.

This is Buzz.  He’s afraid. When alpacas are angry or stressed, they hum and spit, so a cover sometimes has to be placed over their muzzles during shearing. The alpacas are much more comfortable during the warm months of summer without all that fleece and it grows  back in time for our cold winters here in Rhode Island. 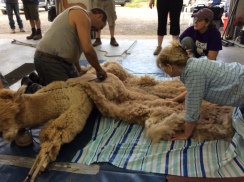 Beautiful Fleece or as ZuZu would say, “Fleas”

You can learn more about alpacas at http://www.alpacainfo.com/alpaca-farm-days

If you’ve never visited an alpaca farm, check out this site for more information and to find a farm near you. I love visiting Shadow Pines  Farm. Bob and Vivian are welcoming and the animals are friendly and photogenic. It’s a great place for an adult/child like me to spend a day letting my imagination spin more adventures for ZuZu and her friends.

The girls waiting to be shorn 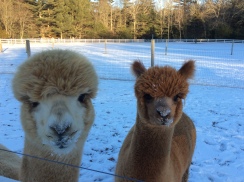 Buzz and Charlie in the snow 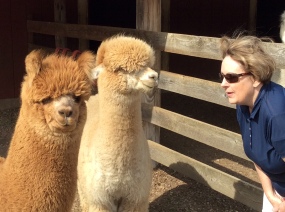 Charlie and Buzz and author 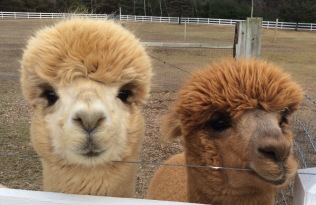 Buzz, aka Twyla and Charlie, aka Ginger
Advertisement

61 thoughts on ““The Pacas are Coming!” – National Alpaca Farm Days”