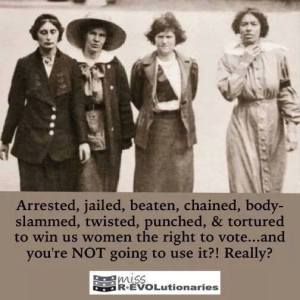 Our constitution affords us certain inalienable rights. It’s ironic to think that during this election cycle, one of the Presidential candidates actually is an alien.

I’ve come to expect certain qualities in the people who have been deemed by their parties, to be suitable  potential leaders for this country. Being an Independent, I choose to cast my vote based on issues and how the candidates will carry forward policies and programs which will benefit our country. I expect well thought out solutions and rational plans to achieve them. What I don’t expect is the ridiculousness we are being forced to put up with in this election. It’s a mystery to me how this can be happening.

Miss Marple is one of my favorite Agatha Christie detectives. She takes what she knows about the personalities and behaviors of the people in her small village and applies this knowledge and experience to situations in which she finds herself enmeshed outside of Mary Meade. That’s how she delves into every mystery; seeing the connections –  those analogous situations. It’s a great technique. I’ve used it many times, myself.

I spent more than thirty years with teenagers, both in the classroom and as a school administrator. I watched them, listened to them and observed their conversations and their behaviors – both good and bad. I always contended that a school was a safe place in which to make mistakes. I understood that when a youngster made a mistake, it was an opportunity to help them understand why and then help them to figure out how not to make the same mistake again.

Appropriate and fair consequences always played a part in the process. I considered my school a sanctuary; a safe place for young people to make mistakes and learn about values, about character, about ethics. I taught English and theatre and the subtext of my lessons was always how to be good human beings. As an assistant principal and then principal, maintaining school safety and creating a positive, nurturing environment were a large part of my job description.

Whenever a student would be sent to my office for the first time, usually defensive, frustrated and angry, I would begin our conversation with, “We’ll discuss the situation in a minute but, first I have a test for you. It’s not difficult. Should you fail the test, you’ll get a second chance. You can come back after school and spend some quality time with me and we’ll study together for your make-up test.” (At this point, the student would have cease ranting and I would have his/her attention.)

“Now, here’s the test. Just remember, if you get the answer wrong, I’ll see you after school and we’ll make sure you get 100 the next time.”

Obviously, not wanting to spend any more time with the principal than necessary, the student would lean forward in anticipation of the question:

A) the kids are in charge? or

B) the adults are in charge?

Now, if you get the answer wrong, don’t worry, you’ll get a second chance after school tonight.”

I assure you, no student ever failed that test. The thought of having to spend more “quality time” with their assistant principal after school hours provided enough motivation to pass the test with flying colors.

But, I knew another factor was always in play. You see, children want to know that the adults are in charge. They really don’t want the responsibilities of being in charge nor are they ready for them. Deep inside, they understand this. They know if they’ve been sent to the principal’s office, it’s because they’ve made a poor choice. They want to be assured they’re in a safe place where people will help them through the difficult times and provide guidance for them to make the right choices.

In retrospect, I realize I’ve learned much more from my students than I ever taught them. And I learned my lessons well. One of those lessons was on the nature of bullies. Within the microcosm of a school, bullies come in all shapes and sizes. But in every situation, entitlement forms the basis for their self-absorbed behaviors. The minority of youngsters who felt the rules and subsequent consequences should not apply to them, entered high school with this attitude solidly in place. And in my dealings with their parents, I came to understand where the roots of this entitlement began. I found, however, when concerned parents worked with me, we were able to turn bad situations into positive learning opportunities.

Over the last few months, I’ve watch Donald Trump making racists statements; calling women “fat pigs” and deeming them  not to be “Presidential looking”. I’ve seen him ridiculing the handicapped, chastising a beauty queen and casting aspersions on a judge and on a gold-star mother.  I recognize this behavior all too well from scenarios in my own past and can make the appropriate analogies.

Lunch time in the cafeteria is always replete with these scenes begging to be turned into valuable life lessons:

The mean girls/boys table where the “self-designated in-crowd” dressed in their designer-labeled clothes spend much of lunch time gleefully targeting anyone not as thin, acceptably attractive, cool and fashionable as they.

The entitled-jocks’ table made up of popular athletes  and their wannabe entourage flaunting their macho superiority by loudly commenting on  the freshmen girls and making sexist comments as they walked through the lunch line about “loving fresh meat”.

(I’ve dealt with many other scenarios that are analogous to the current situation in our country during this election year.  But I think you get my point.)

High school is a scary place at times. It can have so many tiers of hell for too many kids. But if the adults are in charge and have an understanding of how to handle “mob mentality” and “peer pressure”,  they can create a safe and nurturing environment where all students are able to discern right from wrong; good-hearted humor from malicious barbs; kindness from callousness.

Yet, when I think back on all of the situations that confronted me as an educator, it isn’t the faces of bullies that imprinted into my memory bank. They were truly not the essential toxic element within each problem. The toxic core was in the mob mentality or clique mentality seen on the faces of the students surrounding those bullies – the entourage; the kids who appear on the scene to enable and egg on the bullies Those jeering faces, waiting for the alpha male/female to finish off the prey and  gloat together with them over the spoils. I hear their  nervous cheers, signifying an underlying relief that they were not the victims – at least not on that day.

And those are the same faces I see encircling the donald – basking in his unrelenting, harsh sunlight. His entourage stand there waiting like vultures to catch the bloody orts tossed to them after the kill. And therein lies the real nature of cruelty. And yes, it is truly deplorable.

his share of federal taxes. The rest of us willingly carry that burden. It is detestable that he unabashedly benefitted from the real estate crash that devastated the lower and middle-class Americans who lost their homes and the  equity in their homes which constituted their life savings. It is despicable that he takes money meant for charity contributions to use for his personal expenses. It is abhorrent that women are publicly demeaned because they are not the Stepford wives he espouses as acceptable women. It is unacceptable that he believes a competent woman and a competent black man not to be Presidential-looking.

The donald is entitled. This land is his land because he is white and he is rich and he is a businessman who knows exactly how to make a quick buck and take advantage of the disadvantaged. He is defining what it is  to be “presidential”  for  the jeering faces circling him and his prey? And they never seem to make the rational connection – THEY ARE THE DISADVANTAGED and will eventually become his prey if he gets into office. They don’t seem to realize what is at stake. Their ignorance is appalling and does not make for anyone’s bliss.

Americans are searching for an adult to take charge, to ensure a place of safety for the children of this country.

Miss Marple would be able to figure it all out. She would ask the right questions:
What reasonable person could ever think this man is suitable to lead anyone?

Why are the people he obviously detests so openly cheering him on? Do they not know it is him and men like him who have caused the circumstances creating this “winter of their discontent”?

Where were they educated? Why didn’t the adults in charge do right by them and teach them about empathy and kindness and just plain common sense?

How did the donald get out of school without being taught the basic rudiments of human decency?

And finally she would take them aside and ask them to make a choice:

A) the adults are in charge

B) the children are in charge

She would know how to make sense of all this and explain to us why anyone would want to be around this misogynist – this insulting, degrading, dangerous, smug, pompous, disgusting, xenophobic buffoon. 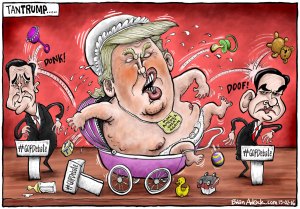 She would give an acceptable explanation of why the enablers refuse to see the terrible history that is repeating itself and in this refusal they perpetuate many grave mistakes which should have been put to rest long ago.

America is still evolving from a land run by a privileged, white male aristocracy –  Those Good Ole Days. Donald’s motto, “Make America great again” looks longingly back to that time.

The fact is, women and minorities have had to do battle for rights given freely to the entitled white landed-aristocracy. We are still fighting for these rights and are still dependent upon the more enlightened white men, whether we want to admit it or not. Those men have the ability, the power, the money, the influence to help in this continuing battle for equality.

If the donald wins this election, there will be no doubt about the clear message being sent to us by them: “We were horrified a black man was elected to lead our country and we are now petrified by the thought of a woman being elected to the highest position of power in our country. How dare they? Obviously, they just don’t know their  place. We prefer a narcissistic, ignorant churlish child. We prefer him because he is a rich, old white man. He’s one of us. He’s entitled.”

This can’t be what all the sacrifices made in the name of Democracy and Freedom has led us to. Surely people can’t have given their lives so this buffoon can take office and make fools of us all? Surely there are enough enlightened men who’ll join with the multitudes of  women and minorities who know we can’t let this happen? Or maybe we’ll just have to do it ourselves?