Edith Wharton had a vivid imagination. As a child, she loved to play a game she called “Making up” which involved  inventing  stories as, book in hand,  she walked around feverishly chanting as if in a trance. This caused her parents much consternation. When friends came to play, she asked her mother to entertain them as she was “too busy making up”.

Her mother, obviously worried about the affect of fiction on the impressionable girl, forbade her from reading novels until she married. She agreed to this. It must have been interminable for her, because she married at the ripe old age of 23, which, in those days, precariously bordered on being an old maid. Although she wrote 40 books in 40 years time, she did not write a novel until she was actually in her 40’s.

There is a saying: “Keeping up with the Joneses”.  The family being alluded to  was Edith Jones Wharton’s.  Her parents, George Frederik and Lucretia Rhinelander Jones were from “Old Money”. This wealth afforded Edith a first class education composed of extensive travel, a talented governess and the books in her father’s library.

As with all upper class girls of the time, Edith was expected to marry well and toward that end, she “came out”  into New York Society at age 17. She married Edward Wharton in 1885 and became part of Newport Society for the next sixteen years. To escape the oppressiveness of Newport social life, she bought land in the Berkshires on which to build The Mount, a home she personally designed.  It was here that she honed her skills as a designer, a gardener and writer.

To say the least, marriage to Teddy had its trials.  He didn’t work, “loved” the ladies, and found ways to fritter away his bride’s inherited wealth. They shared one thing in common and that was a love of travel. But his increasing mental instability put an end to that. (So much for “marrying well”.)

They lived at The Mount only for ten years, but it was in this magnificent environment that she created her greatest works. During this time, her marriage to Teddy disintegrated. After eleven years, she sold The Mount, moved to France, and eventually divorced him.

Her first published work was a collaboration with architect, Ogden Codman entitled The Decoration of Houses. When she began to write her novels, her talent for describing detail made them coveted editions. She was the first woman to receive the Pulitzer Prize for her novel, The Age of Innocence.

Within her books can be seen a reflection of the people and times of the era, partiularly the elite and the world in which they inhabited. She could be quite judgmental on the manner in which they lived their entitled lives. It was, perhaps, best for her that she chose to settle in France away from the New York and Newport Society dams of the day.

During World War I, she remained in Paris to support the French war effort with her humanitarian projects. She dedicated herself to aiding those  suffering most from the war, establishing sanctuaries for refuges, schools for children, and homes for people diagnosed with tuberculosis. She was nominated for the Nobel Prize for Literature three times. She was one of only a small number of journalists allowed on the front lines and in 1916 she received The French Legion of Honor for her work during the war.

Wharton’s loves included literature, architecture and travel and she developed a strong kinship for France and Italy. While at The Mount this July, I took some photos of the French and Italian Gardens. 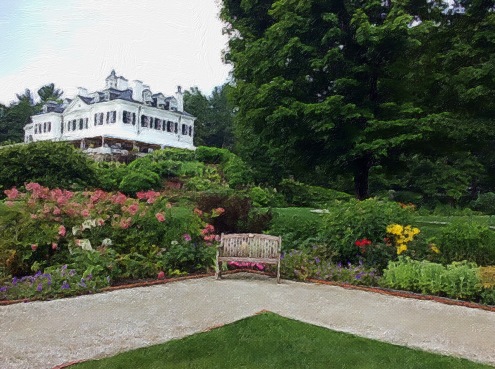 The Mount from the French Garden 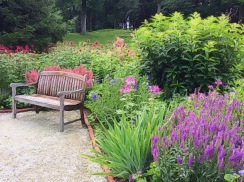 Bench in the French Garden 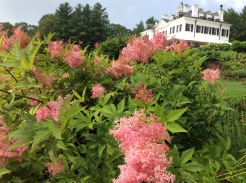 View From the French Garden 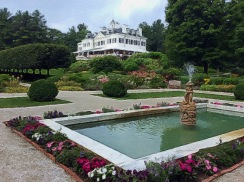 Fountain View from the French Garden 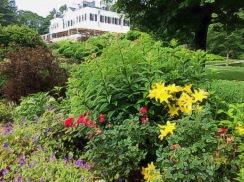 From the French Garden

Edith’s beloved home has been restored over the years and is now a reminder of that long ago time and a center for the arts. There are performances of plays and music and lectures and during the summer, children can listen to stories being told in the Italian Garden thanks to Books and Blooms. 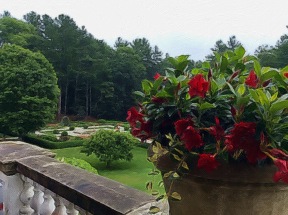 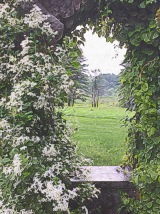 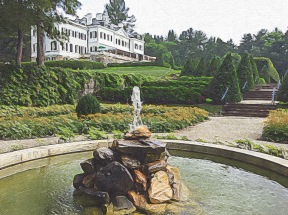 Fountain in the Italian Garden

Bench in the Italian Garden

Vista through Windows in Italian Garden

I was invited by Kelly Bevan Mcllquham, editor of Berkshire Family Focus, to read the January story from my book,   A Berkshire Tale.  Because of an early morning rain shower, we decided to have our reading on the porch overlooking the gardens. Little visitors came in and out with parents to hear the story, chat with me and to do a craft which involved making an invitation for a person (or a pet, in some cases) to read with them. There were also pages of kittens and alpacas to color and decorate thanks to Rebecca McBrien.  A family visiting from Paris stopped by to join in the fun and brought a book back home with them to France to share with cousins. I think Edith would have liked that. 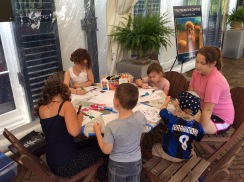 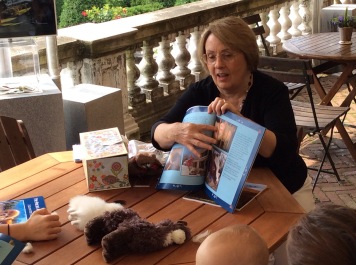