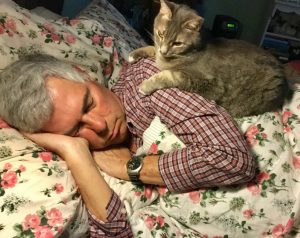 Roxie D. here. It’s been a long winter in South County, but the good news is Dad and I have spent some quality time together chillin’ out. Our motto is: “Avoid stress. Take a nap!”  I  happen to think everyone could benefit from taking a nap with a cat and now that humans are being directed to hunker down for a while, I’ve declared the whole situation Win/Win! Whatever this virus thing is, it’s working for me. I never get to go anywhere, anyway, and as long as there are food and treats, I could live like this forever.

We’re really lucky out here in the woods of South County. Our home is comfortable and warm. We have windows to look out into the yard. The humans are in the kitchen cooking together every day and since mom is a total klutz, there’s always lots of food dropped on the floor for me to help clean up – with plenty left over  (Did I mention that Mom’s a slob?) for Mom’s Cutie, Darling, Sweetie Pie, Itzy-bitsy Baby ZuZu.  And because both parents are at home all the time, there’s always an empty lap to settle into somewhere in the house. I prefer Dad’s, but sometime the little fur ball gets to it first and I have to settle for second best which is a real pain because unlike Dad, his wife, the Human Jack-in-the-Box, can’t seem to sit still. Up and down, up and down. (I want to scream “Get the woman a horse tranquilizer, please!”)

I find her behavior quite unsettling and outright rude. I’ve expressed my feelings on numerous occasions by sticking my pointiest tooth into  her head while pulling at her hair, pretending I’m trying to nuzzle her. I think she’s on to me, though, because I’m pretty sure she purposely bit my ear the other day. It definitely wasn’t one of those kisses she plants on her “Iddy-Biddy Widdle Cupie Doll’s” head. And she even looked me in the eye and said, “How would you like it if I nibbled you?” I mumbled, “At least I don’t taste like that stinky shampoo you use, you old grapefruit,” but it missed the mark because she just smiled and scratched under my chin. I don’t think she understands a word I say.

You’re probably wondering where I’ve been for the past year or so. I would like to post every day, but She who Hogs the Laptop has been writing furiously. She now has four published mysteries with another ready to go for this September. Dad was amazed when he came downstairs one morning and realized she was already typing away – starting the 6th mystery before the 5th one wasn’t even hot off the presses. That woman loves to murder people!

I was hoping she would have written that book about me by now, but it seems she’s decided to put cute little animal stories on the back burner. This   murder mystery faze started at the same time she began yelling at the television after the 2016 election. Dad tells people it’s a good thing she writes because that means he won’t be bailing her out of jail on a regular basis. At this rate she could surpass James Patterson and he has a whole team of people writing his books.

I can hear the refrigerator opening and it’s about that time for the next episode of “Slopping up the Kitchen With She Who Spills Everything”. Yummmmm! I think I smell the makings of a meatloaf in my future. Yup, I just heard something hitting the floor. Splat! I’m on it! Take care, stay in, find a warm lap, and stay safe. Until next time, Love

AKA The Other Cat

30 thoughts on “Roxie D. on Dealing With Stress”